NO 11: SHOOTOUT AT PETTICOAT JUNCTION 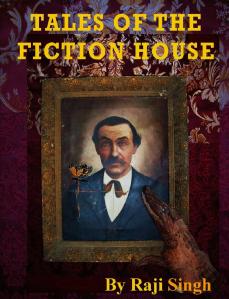 Our Founder, James Thaddeus “Blackjack” Fiction
‘Tell our stories, Raji. If you don’t, it will be as if we’ll never have lived.’
These whispering cries of joy and sorrow rise from the bookshelves and portraits in the Fiction House.
I cannot refuse.

Everyone at the pro-slavers after Sunday-come-to-meeting picnic thinks the horrific sound is from a retching crow.  Abolitionist author William ‘Golden Boy’ Golden, posing as his Willamina undercover persona, knows it is his compatriot in abolition, Captain Polly, warning him – something’s awry.

“Jake, dearest.  Your Sweet Little Legume just, HAS TO, use the little girl’s outhouse,” you say in your best Willamina sing-song.  You fidget.  You sway.  Jake releases his Gila monster lock on your arm and obligingly kisses your cheek.  You hate the rub of his whisker stubble.

You’re thinking, as she leads you down a prairie-rose path, ‘things may start getting thorny.  Better to take your leave, live to see another day.  If nothing’s wrong, you’ll return with the excuse,  “Papa fetched me, Jakey.  He wanted me at church.”

Jake’ll believe.  So twisted around your finger he’ll swallow anything his Little Legume might dish up…‘Oh, darlin’ Jake.  Your eye’s on fire.  It’s so bright and hot it’s giving me the vapors.  Be a dear and pluck it out so your sweet Willameenie will be comfortable?’

~ ~ Golden Boy, as Willamina, notation:  ‘Hey sisters, we all know gents like Jake.  Which friends will they sell down the river to please us?  What’ll they sell, borrow, or steal to covet us?’  ~ ~

Jake’s sis leaves Willamina alone in the outhouse and returns to the picnic.  Willamina hears a scratching against the roof and a muffled, “Golden Boy, Golden Boy.”

“Before I sacrifice an opportunity to discover more about their plans, Captain Polly?” Golden Boy whispers,“I better be certain.”  Never discount Captain Polly’s information, he realizes, for maybe the hundredth time, when he hears Jake suddenly begin ranting in the distance,

You hear boots and shoes stampeding the earth.

“I never trusted her, um, him” Jake’s sister screeches.  “She, um, him, he’s not good enough for you Jake.  He’s a stinken’ abolitioner.”

You peak out the crescent moon slit on the door that acts as vent.  The hoard heads your way.

Trapped like a rat – albeit one with makeup concocted by mixing ash and elderberry juice by campfire light that makes him, look so naturally, she.  And no rat would wear the latest petticoats from Paris.

Captain Polly’s call is too loud.  She attracts attention.  Somebody shouts, “Up there!  A stinken’ jayhawk.”  They shoots.  “ZING!”  A bullet jets twixt Captain Polly’s wing and breast.  She feigns death, dropping behind the outhouse.

“She’s faking,” the little dickens who thought he shot Captain Polly earlier in the day, shouts.  “Let’s get her.”

With her beak-snout, Captain Polly pulls at the loose board as Golden Boy kicks.  It crushes out.  He crawls through, losing his bonnet and wig.  He follows Captain Polly, unseen, into the woods.  He strips away the the hindering Willamina dress, petticoats, bustle, girdle.  Ta Da!  Appears – canvas shirted, jeaned, cowboy William.

“To the river.  To Turt,” squawks Captain Polly, quietly as she can.

The little dickens got great ears.  He’s the only pro-slaver to hear.  “They’re headed Kaw River way,” he shouts.  They follow.  In a moment, they see him.

Bullets zing past Golden Boy as he dives into the muddy water.  Captain Polly swoops upward, circles, flying interference.  Gunfire misses her.  “PLUNK, PLUNK, PLUNK!”  Bullets can’t find Golden Boy as he submerges and swims.  Pursuers follow him in, then under.

What they find, they’ll never forget –

Turt – in full underwater battle prowess.  Unmatchable by any human.  His shell.  Impenetrable.  He’s long as a sea lion, but leagues more imposing with his razor-shark beak-snout and fin-claws.  He’s wide as a stingray, and as swift and deadly.

With one slam of mighty fin-claws Turt brains some pro-slavers.  With massive beak-snout, “CRACK”, he snaps arms and legs of others.  With fin-claws, he peels skin from not just a few of the screaming ‘two-legs’.  They retreat from the water – blood reddened, meaty-faced.

None who chased in after Golden Boy could fully see their attacker.  In the one-sided battle, Turt churned the water into a cascade of mud:  So the portrait of the ‘monster’ in future telling of the nightmare varied, stratospherically – from dragon, to ogre, to bear.

~ ~ Raji Singh, editor, archivist, ‘archeo-apologist’ Fiction House Publishing; note.  The hundreds of stories and legends that grew from this river battle, stirred fear in the thoughts of uncountable ante-bellum slavers and slave hunters.  It did so again during the war, with Confederate soldiers and sympathizers who believed the opponents had a vicious underwater ally who could crawl out onto terra firma and wreak land carnage.  ~ ~

Satisfied that he’s quelled the pursuers, Turt swims to the nearly breathless Golden Boy.  He submerges and takes him onto his shell.  Midst cover of cattails growing along the bank, he rises to allow Golden air.  Off they float with Golden Boy holding tight.

Captain Polly’s barely in the cover of clouds, watching to be sure the getaway is clean.

And so, our trio lives to fight many-another day, for the rights of all.

Alas, the picnic ends.  The vermin hoard return to their holes to recuperate, or die.

Alone, Jake traipses the woods gathering Willamina’s dainties.  On the riverbank he kneels, buries his face into the dress that still holds Willamina’s unforgettable coriander perfume.  He breathes it in deeply, falls prostrate and weeps mightily.

Captain Polly swoops from the clouds and smiles to herself as she listens to his choking voice.  “I love ya, Willamina, My Little Legume.  I surely do.  That ter-ra-ble Golden and his monsters stole you away from me.  I jus’ know it.  I jus’ know you’ll break free of ‘em.  I’ll find you one day, My Sweet.  I’ll never stop looking.”

I am a writer, a foundling anchored by tale-telling and imagination. Read my history in Tales of the Fiction House, available at Amazon.com and Barnes & Noble (This is a portrait of my great-great grandfather. He's a handsome devil and I am his spitting image.)
View all posts by Raji Singh →
This entry was posted in archeo-apologist, Fiction House Publishing, humor, satire and tagged Abolitionists, American History, Border Ruffians, Captain Polly, Free -Staters, Jayhawkers, Tales of the Fiction House, Turt, William "Golden Boy" Golden. Bookmark the permalink.

1 Response to NO 11: SHOOTOUT AT PETTICOAT JUNCTION