No. 58: THE CZAREVICH’S TALE OF THE TRAVELLING FICTION HOUSE 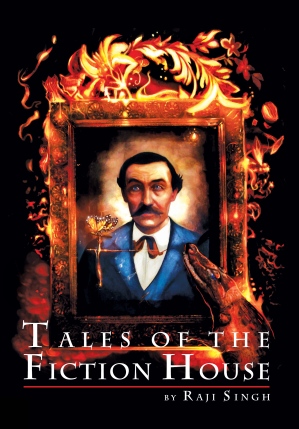 Peter the Great in fresco reaches for you from the domed ceiling.  Still groggy, you think he take your hand.  His is so warm, you feel this is real, not dream, not imagination.

You look down, from his old, yet still blazing eyes of blue, into…young, just as blazing hazel, those of the Czarevich.  Trembling, you try to pull from his grip.  He holds tight.  The sweat of his palm intermingles with the perspiration of yours.

“Do not be afraid, young Miss.  You are in good hands.”

He wears black pants, boots.  The Royal sash crosses his glistening silk shirt.  You sit up on the fainting couch on which you have been reclined, and glance yourself.  Your flowered dress wrinkles, but the buttons are in place.  You move slightly; feel your undergarments are in place.

‘In kind hands,’ you want to believe, confused, not knowing what to do, but relaxing, just a little.  Unlike his father, you have heard only good things of him.

Two orange-jacketed guards stand rigid as statues on the side of the expansive room.  Such lush surroundings; this must be one of the Imperial Family’s many palatial manors.  Ruby red and yellow gold orb-shape stained glass windows of Czars and Czarinas past, wink serenely at you.  High walls absorb the emerald hues of ferns embracing them.  Silver plaques, in terra cotta planters, announce their continent of origin.  Their foliages’ mingling aroma waft through sharply arching corridors, and your senses:  All at the same moment, you visit; the crisp African savannah, Europe’s crystal mountain air, Asia’s balmy jungles, Australia’s dry-perfume grasslands, South America’s damp forests, and the North’s earthy plains.  You breathe deeply.  Despite your ordeal, you’ve never felt relaxed as now.  The magic elixir that is the exotic plants – its purpose is to have a calming effect, you realize.

It as if the Czarevich reads this in your look; and why he responds,  “Blackjack Fiction insisted we bring you here, Young Miss, and your father agreed.  So you may be calmed, away from your worries about the rope haired man.”

You tense, pull from his embrace.  (What young woman in all Russia would believe one of their tribe would pull from a handsome Czarevich?).  “How do you know Blackjack and my father?  Where are they now?”  (Who could imagine, Shelva, YOU making demands of a member of the Royal Family?  But…desperation)

Before the Czarevich can respond, a balding butler and his bushy haired charge, both better dressed than the Mayor of Moscow in their smartly cut tuxedos, wheel in meals on satin covered carts.  Following them:  A half dozen maids looking like elegant ladies of the court in their stylish uniforms, in comparison to some of even the most elite women of Moscow.  They, un-lid peppery braised meats, steamy chicken, and swimmingly fresh caviar from sterling silver platters.

“Such opulence, even for one simple function, Shelva?” you ask yourself, as they depart.  The butlers serve up the food onto bone china dishes, and set them on a small marble table.

You suddenly realize how hungry you are, haven’t eaten in many hours.  So temporarily, you forget your questions.  You sit when old baldy gently slides out your chair.

But the Czarevich doesn’t forget.  He waves his hand, dismissing the servants.  The broad ivory panel doors, intricately carved with black bears, growl quietly shut behind them.

(Embarrassed, you think.  ‘Or was that your stomach, Shelva?’)

The Czarevich sits opposite you, and says.  “I hardly know your father, Miss Shelva.  But I feel closer to Blackjack Fiction than I do to my own father.  Mrs. Fiction, she is as a second mother.  Now, onto matters more pressing!  As we speak, Blackjack and your fa are making inquiries of the rope haired man to get to the bottom of this whole sordid affair.”  He pours a fruity sherry cobbler, for me, champagne for himself.

The meal and the Czarevich’s pleasant demeanor are calming:  His words, actions – so soothing.  After the servants clear, he retrieves the cat palanquin, replica of the Fiction House, which has been sitting in a corner and places it on the smooth table.

“Have you ever been to the Fiction House, Miss Shelva?  You and Blackjack did a marvelous job recreating it in this cat-sel.”

“I’ve not been outside Mother Russia.”

“Well, maybe the Fiction House will visit you here.”

‘Hmm!  What?  What did he say?  Oh, he is jesting.  I smile.  “The different ways that Blackjack described it as we built this, Kind Sire, it must be so beautiful.  Not lovely as this home, of course.”

“On the contrary, Miss Shelva.  Fiction House is truly the loveliest place I have ever seen, and I have seen Shah Jahan’s Taj Mahal, Napoleon’s Malmaison, Jefferson’s Monticello, and the Czar’s Winter Palace.  The beauty of Blackjack’s Fiction House, resides in the freedom it represents to humanity.  Freedom of body; because so many passed through its safe corridors on their flight from slavery, freedom of mind, for all the truths printed and disseminated from there about abolitionism.”

The Czarevich pauses.  When he continues a heaviness of emotion swells his voice.  “For me it represents a loving home, family, more so than any grand palace.”

Tears moisten the Czarevich’s eyes.  You take your handkerchief and softly dab around them.  Your fingers brush his warm cheeks.  You do not know if you are acting properly with a Royal.  He seems to understand.  He takes your hand and places it on the palanquin’s gable, keeping his hand on yours.

“Do you know what makes the Fiction House unique, Miss?  It can be taken apart.”

“Of course.  We built it that way so it could be transported.”  You demonstrate by swiftly disassembling it, like a one-piece puzzle.  You quickly transform it into a rectangular suitcase with many false bottoms and tucking pockets to hide things.  Then you reassemble it, just as swiftly, into the palanquin house.

You laugh a little, and joke to ease the heaviness of the Czarevich’s royal burden from which you realize he yearns escape.  “Ragamuffin could not be home at his Fiction House Cat-sel to greet you, Sire.  He is sitting for his official portrait as the International Cat Boxing Championship representative from America.  His likeness will hang in the grand hallway of the Winter Palace – alongside Cat-there-in The Great.”

“When did you go to America to visit the Fiction House, Sire?”

“Many times.  You see, it was not the plans for me to be Czarevich, but for my elder brother, before he passed away.  So I was escorted around the world.  I was to learn ambassadorship.  I visited the Fiction House in many locations, first when it was in Cincinnati, later Manhattan, and then when it was in Lindia City, Lindia.”

“No Miss.  This is what makes the Fiction House oh-so-much-more unique than all the Taj Mahals or Malmaisons.  It is moveable.  They must remain in one place.  Blackjack must never have told you.  Maybe this is so, because of remaining remnants of his playing it close to the vest – as would a card gamesman – to protect not only his business secrets, but also his abolitionist group’s actions.”

He opens the tiny door with his finger as if he is entering.

“Grand craftsmen sympathetic to the cause built it with secret passages and hideaways, and so it could be quickly disassembled and moved so swiftly, one would think it is a phantom house.  As a boy visiting, I explored it endlessly.  There were always new secrets to find – camouflaged doors beneath lavatory sinks, leading to tunnels tall as I, false walls masking large rooms where families could live comfortably for months if needed.  So many bookshelves that revolve to open, I had to memorize the volumes to be sure I wasn’t entering one I wasn’t familiar with and maybe get lost and perish.”

A gleam twinkles in the Czarevich’s eyes.  I cannot tell if it is from joy, or melancholy.

“The Fiction House is so grand, Miss Shelva.  Grander than the Czar’s Winter Palace, ever, could be.  Wherever Blackjack chooses to live, he takes his puzzling mobile home.  Before and during America’s Civil War it often, vanished, when slave hunters sniffed too closely to it for their human prey.”

~ ~ editor note:  Over the years, as I have done my archeo-apology work at the Fiction House, I have found, squirreled away in nooks, crannies, and secret compartments in the Fiction House, notes Shelva jotted down.  So many involve revelations the Czarevich made to her that day in the 1870’s.

‘For over 80 years now Shelva, you have made the Fiction House your home.  Still you are discovering the secrets it holds, and its secret rooms.  Once, coming upon well-appointed living quarters, dust free, coffee still warm on a small burner, that day’s paper on a stand beside a reading lamp.  Ever so befuddled, Shelva, have you been?  Other than occasional overnight guests around that time, the only other residents were your darlink druzhyna husbant Dr. Fiction, yourself, our infant, James III, Cook, Nanny, and ‘cantankerous hired hand, Efraim’.

‘James is with Nanny.  “Behind the shelves with you, Shelva, and hide” you tell yourself.  You must find out who so surreptitiously makes your Fiction House, their home.’  ~ ~

Next Week:  Who is the brazen interloper?  A meticulous drifter?  A lands-man from the old country?  Maybe a handsome young Czarevich yearning to be at peace; at the place of the people he most loved?

(Join me every Sunday night at the Fiction House, your place for short story, lark, whimsy, and merriment.  Meet the many residents as I archive their lives and centuries of adventures.  You can read of their origins in my novel TALES OF THE FICTION HOUSE.  They are completely different stories.  My novel is available at Amazon, and Barnes and Noble.)

I am a writer, a foundling anchored by tale-telling and imagination. Read my history in Tales of the Fiction House, available at Amazon.com and Barnes & Noble (This is a portrait of my great-great grandfather. He's a handsome devil and I am his spitting image.)
View all posts by Raji Singh →
This entry was posted in archeo-apologist, Fiction House Publishing, humor, satire, Short stories, Whimsey, writing and tagged Abolitionists, alternate history, Alternate Russian History, cat boxing, Czar humor, Czarevich romance, Efraim Ephraim, James Thaddeus 'Blackjack' Fiction, new short stories, Raji Singh, romance, Shelva Fiction, short story, Tales of the Fiction House, The Fiction House. Bookmark the permalink.

3 Responses to No. 58: THE CZAREVICH’S TALE OF THE TRAVELLING FICTION HOUSE