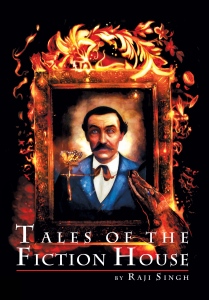 Our Founder, James Thaddeus “Blackjack” Fiction
‘Tell our stories, Raji. If you don’t, it will be as if we never  lived.’
These whispering cries of joy and sorrow rise from the bookshelves and portraits in the Fiction House.
I cannot refuse.
(Artwork enhancements by: Joseph Rintoul)

My hired ‘experts’ jokingly, good-naturedly call me an archeo-apologist.  It is because of my zeal for my reclamation project – that of unearthing and archiving files, notes, books – over a century’s worth of information on one of America’s oldest, most prestigious publishing houses – Fiction House Publishing.

Often the work overwhelms me.  When that happens, sometimes I become careless in my separation of fact from fiction.  But the experts, professional archeologists, and anthropologists all, do not pardon any of my historical misinterpretations (my ‘archeo-apologizing’).

“Unblemished”, will be the term to describe the accuracy of my work, with their knowledgeable assistance, as onward I archive, collate, and now, finally – present.

But wait.  Fact and fiction for me is a blur.  That trait is I truly believe, engrained in the fiber of my being by my orphan circumstances.  As a youth, I would slip into my imagination to cope.  So comfortable in my cocoon of make-believe, the fiction of it all became fact.  In my imagination, I sought out and befriended my great-great grandfather, James Thaddeus ‘Blackjack’ Fiction, the Fiction House’s founder.  He too was orphaned, but 140 years before.

Ahh!  Best of friends, though we never met.

Our common orphan heritage – it binds us yet today.  Our oneness and solidarity so colors my resurrection work that ‘archeo-apologist’ is probably what in fact I’ll always remain, because though my name is Raji Singh, a Fiction is who I am.

Now, here is a short excerpt from Blackjack’s publishing journal that briefly shows his orphan background that so played a part in leading him to the hierarchy of 19th and 20th century publishing.  And, within it – the answer to my last posting’s question, with whom was Charles Darwin beginning his romance – ‘THE literary romance of the 19th century.’

By the banks of the Ohio, she’d be standing, arms outstretched.  Her long black hair, an ebony river all its own, flowed in the breeze.  Or maybe her hair was a flag, waving in the bird that flew up the Ohio and landed on her shoulder just as the sun started its rise.  Her frame was post-straight, like the sensuous figureheads on the ships bows that I imagined beckoning me to accompany them on adventures as they departed the docks.

I was entranced by this woman, not like a boy with his mother, aunt or sister; or a near teen with a female not more than ten years his senior.  She was mystical, magical.  Someone, I just knew who harbored secrets of emotions few others did.  I wanted to breathe in full the scent of those emotions; to caress, to hear their siren call, somehow even taste their culinary delight.  I knew, at that moment, she would lead me to the vast banquet that is pure, virginal joy.

‘Nothing ventured, nothing gained,’ Mariner so often ‘adaged’ me as we spun tales of our days, by night’s lantern light of the crate-wood wharf-shack – Home.  (Mariner was my father, friend, brother, teacher.  Every book I ever voyaged into was because of this man who couldn’t read a word.)

Today, I would venture to meet my living bow figurehead.

“Hello,” I shouted, but the word came out barely a whisper.  She turned as I approached.  She was unwinding a paper from around the bird’s leg.

She smiled.  “A letter from my soul mate.”

I wasn’t disappointed.  “How did the bird find it?”

“She’s a carrier pigeon.  She brought it.  All the way from a ship, thousands of miles away.  In a few days, she’ll return to my Charles with a reply.  Charles is such a keen man.  He’s trained them to do things one would think unimaginable.”  She put her finger to her mouth, giggled, and then put her finger to the pigeon’s beak.  “Shh!  Our romance is a secret from our papas.  For now.  But one day we’ll tell them.”

“Did his ship launch from Cincinnati?  What’s its name?  Maybe I know your Charles.”

“You’d not have met.  He left from England, on HMS Beagle.”

We sat on the rocky bank and talked for hours that Sunday.  And for countless hours on what seems now like hundreds to come.  My – banquets of Sundays.

“I’ve seen you tell your tales to the gathered dockworkers,” she said.  Their smiles are a joy to behold as they listen.  How many nickels and dimes do they fill your capper with?”

“Sometimes six, ten, once even a dozen bits.”

“You should write down your tales, and sell them.  Think of all the others who could wear such smiles also.  If you tell better than you write, there are scribes for hire.”

Thus did Harriet Beecher plant the seed in my thoughts.

Fiction House Publishing would be the thriving result. ~ ~

NEXT WEEK:  Blackjack returns to the Fiction House, over 150 years after he founded it.

I am a writer, a foundling anchored by tale-telling and imagination. Read my history in Tales of the Fiction House, available at Amazon.com and Barnes & Noble (This is a portrait of my great-great grandfather. He's a handsome devil and I am his spitting image.)
View all posts by Raji Singh →
This entry was posted in Uncategorized. Bookmark the permalink.