No. 67 Like the New Year, Life is Full of Beginnings 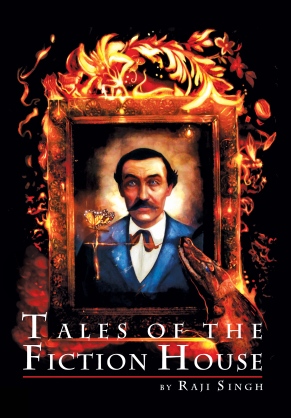 THE CARPER’S TALE   (From Tales of the Fiction House)

Daylight for just 15 minutes and already summer’s heat has dried dew from the Cincinnati pier.  A stoop-shouldered ancient mariner in an age-cracked slicker gamily trudges the seemingly un-ending stretch.  Alone.  Sunken jaw ratchets, way to below Adam’s apple, as he grumbles,

“How long I gonna live?”

These would be the first words my great-great grandfa, four-year-old James Thaddeus Fiction, would remember hearing for the rest of his life.  From beneath an abandoned fish cart, he mimics squeakily, “How long I gonna live?”

The boy echoes, “How long I gonna live?”

The sing-song reminds Mariner of albatross he heard while sailing around the Cape of Good Hope.  He clunks down his bamboo fishing pole and peers under the cart.  “Why, you little carper.  You just parrot me?”  He reaches for and reels into the sunlight a soot-covered boy still trembling from the night’s chill.  Mariner’s knobby knees blink at him through dungaree holes.

A calico butterfly of silver, ruby, and gold had lit on the youth’s head.  “I see one of my friends been keepin’ ya company.”  Mariner winks at it as it flits away, “Happy sailin’, Calico.”  He bands to the boy. “So what’s youren name?  What you been rollin’ round in? And what in the name of Poseidon’s ocean you doin’ schoolin’ here?”  Sniff.  “Eew!  Yer rank as my giant pal Turt after e’s swum the Atlantic.”

Boy wants to say, “How can you smell me over your owen’ self?” Manages onl, “Umm…”

Mariner squints at his first catch-of-the-day and grumbles to it.  “Likes that one too, I do. Don’t think I’ll throw ‘im back, either.”

Boy’s face crinkles prune-wrinkly as he flinches; not so much from being level with something looking so like the fire-breathing monster of the nightmare he’s just awakened from – wild silver hair, blood eyes, warty cheeks and knife nose – but from  the sour smell reeking from pebbly-textured mouth.

Everything before this moment – who he is, where he’s from, how long he’s been here – is blank, dark as his previously alabaster torso.  He wears only short pants with pockets hastily stuffed with childhood trinkets, marbles, tin soldiers, a spinning top.

Escaping bed and building during the fire.  His mother ferreted away.  Wandering aimlessly.  Collapsing here from fatigue.  36 hours have since passed.  For him it easily could have been 36 days or 36 minutes.  The wrenching scars his memory – as happens with most foundlings.  Yet, after all that, he doesn’t fear this living monster.

“I said, what you doin’… Oh never mind.  I start you carpin’ and you look like the type’ll never clam it.”  He engulfs the boy’s hand in his bony fingers – arthritic from a lifetime of casting nets and setting sails – elevates him, until toes are level with his whale-bone belt buckle; surveys him as he would a catch.

A passing paddle-wheeler on the mucky Ohio steam-whistles out a baritone ‘ahoy’ to old salt and young dawg.  “Let’s sail, Carper.  My stateroom – she’s up the way.  I’ll get ya cleaned and chowed.  Then we can find youren.  Unless yer a stray.  You stray from the orphanage, Carper?  If that be, well…all the more power.   Believe me,” he rasps, angrily clenching fishing pole, rap, rap, rapping its hard butt against the dock….”I know first-hand how’s ya don’t wants to be in a place like that!”

The boy’s thoughts are blank as they walk and he clutches Mariner’s hand:  No happy or sad as he looks up into a face equally expressionless as his, only a primitive gratitude for the presence, for the touch of another human.

Next Week: The Carper’s New Life in the ‘Stateroom’

(Join me every Sunday night at the Fiction House, your place for short story, lark, whimsy, and merriment.  Meet the many residents as I archive their lives and centuries of adventures.  You can read of their origins in my novel TALES OF THE FICTION HOUSE.  My novel is available at Amazon, (Kindle and Trade Paperback) and Barnes and Noble.)

I am a writer, a foundling anchored by tale-telling and imagination. Read my history in Tales of the Fiction House, available at Amazon.com and Barnes & Noble (This is a portrait of my great-great grandfather. He's a handsome devil and I am his spitting image.)
View all posts by Raji Singh →
This entry was posted in archeo-apologist, Fiction House Publishing, humor, Short stories, Whimsey, writing and tagged alternate history, American History, beginnings, Carper, Cincinnatti, Foundlings, Friendship, Happy New Year, humor, James Thaddeus 'Blackjack' Fiction, Mariner, new short stories, New Year story, short story, Tales of the Fiction House, whimsey. Bookmark the permalink.