VALENTINE, COME WITH ME TO THE KISSING TREE (A SUMMER ROMANCE)

What is summer without a summer romance? Though they may not last forever, the memories do!

Enjoy a memory of a young boy’s summer bliss in this loving piece from the Fiction House Publishing’s,  The Seasons of My Giving Back by Mark Rogers.

Who would ever think? A broken furnace boiler leading to my first real kiss.

Oh, there’d been plenty on the cheek – by Mother, all the Aunties, by my imaginary muse, Luny Mum, and yech phew!  Fickle Marr-grr-ett from school.  Often came tickly pecks from Captain Polly.  From Turt, slurpy beak-snout nuzzles.  I’d feel butterfly wing flutters caress me when I walked through the Woods.

But none of them was anything like what was to come – and on a day so appropriate, Valentine’s Day!

(Had my joys of giving back to others, made me appreciate the giving backs to me?)

No matter, that it is the coldest day in all of Cincinnati history, I stay warm because I burn with ecstasy as I run home from Mrs. Florsheim’s fourth grade classroom.

Before I can herald the ice-shattering headline news – “NO SCHOOL, MOTHER; FOR AT LEAST A-WEEK-AND-A-HALF!  UNTIL THE NEW BOILER ARRIVES” – Mother greets me, even more excited than I, from atop the stairs.

“The principal called, Raji.  This means we will be able to accompany your Fa on his trip.  So hurry.  Come and pack your clothes.”

Within an hour, we are on the plane to New York to connect to a Lindia flight.

“You’ll get to see Reena,” Mother whispers so she won’t disturb other passengers; or maybe she wants to share a private moment.  Perhaps she doesn’t want to embarrass me in public.  “Valentine Day is big in Lindia as in America, Raji.  I knew you might not have time to get Reena a card.”

She hands me a red envelope.  “You can give Reena your heart.” 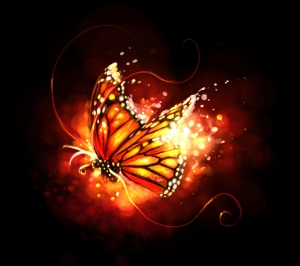 My Heart Flutters like Calico, A Foundling’s Gentlest Friend
(©2013 Image by Joseph Rintoul)

I mostly turn red, as the envelope.  But inside my smile fills me completely. ‘Reena!’ I haven’t seen her since last summer.

I sleep most all the way over the ocean.  I dream of Reena, working alongside as volunteers helping feed the poor, and then later playing together – jacks, cards, exploring the Lindian Woods.

When I drowsily awaken, I look out the window.  ‘Reena!’  Her semi-cupid smile and sweet chocolate hair sway gently in dreamy cloud drifts.

Our plane lands in Lindia City.  Fa goes to consult on a free clinic he and other doctors are establishing.  Mother and I visit the smooth-face Aunties and gray-bearded Uncles.

After so many cheeky kisses, both bristly and soft, Mother brings out a costume the Aunties have made for me.  The scents of their exotic perfumes, absorbed by the yellow silk cloth as they sewed it, lingers as I put it on.  A scarlet-teethed betel nut chewing Uncle whiskers my face with black paint and marks my bare arms with orange blotches.

I am to be a young tiger, alongside dozens of other similar young human cats, at a benefit for the clinic.  Another of my Uncles, Uncle Balu, a real life Tigerman, will be the entertainer.

~ ~  editor note:  The art of the Tigermen is ancient, its Lindian origins unknown.  The performer in tiger costume and regalia dances lithely as the big cat, and sings-growls hauntingly of its plight.  Tigerman troubadours traveled cities and villages entertaining just as circus, movie, and tv do today.  In the 21st century, Tigerwomen have joined in this resurging cultural phenomenon.  You can see a demonstration and learn more of the art of the Tigerperson in Raji Singh’s novel Tales of the Fiction House.  ~ ~

The curtain falls on our performance.  The tiger kids gather around Uncle Balu, adulation, as if he were a rock star.

She’s a face painted young tigress in golden slacks.  She was a dancer too.  I just hadn’t seen her in the masquerading tiger troupe.

Uncle Balu motions with his claw, ‘Go with Reena, Raji.  We’ll see each other often while she’s in school.’

Reena and I walk into the bright sunlight, paw in claw.  I had thought that when we first saw each other we would screech and howl like wild cats, and pounce into the Lindian Woods.  Instead, we walk slowly and our words, especially mine, come like timid purrs and near-silent meows.

Oh no!  I left the card on my suitcase when I changed for the show.  If only there was some tiger-magic that could make it bound through the window and fly to me.

Before I attempt to stammer, “I…I have a card for you too Reena,” I hear a voice saying, “Aark!  Ark!  I know what you’re thinking.  I’m on it.”  It’s Captain Polly.  She’s in a tree, camouflaged by colorful leaves.  I should have expected her to be spending a tropical few weeks here, while it’s 20 below in Cincinnati.

Inconspicuously, she swoops away.

Reena looks around.  “Did you hear someone calling for someone named, Mark?”

We walk through the woods, our purrs, our meows slowly becoming human words.

“Will you be coming to Lindia this summer?”

“Definitely, and for the whole summer.  We’ll work alongside each other, again.”

Behind the golden face paint, Reena’s smile becomes sun-bright.  I’m emboldened.  I twist my neck so our faces are inches apart.  Reena closes her eyes.  I wet my lips and I ready to…

A trumpeting blare coming from the close-by river startles us.  We pull away from each other.

Of course, I should know by now.  When Captain Polly is, nearby, Turt probably is too.

‘Darn it!’  I suddenly realize.  Turt’s blast was intentional – my shell fellow’s good-natured ploy of scaring, enabling me to take Reena into my protective embrace.

Reena once again hears “Mark”, and walks around the woods looking for someone by that name.

Captain Polly carries the red envelope in one talon.  Swift as a falcon she swoops down, lights on my shoulder, and slips it down the back of my shirt.  She whispers so Reena cannot hear, “Take her on a romantic cruise.”

I know my facial expression asks, “Where?”

I open my mouth, no words, not even a timid meow or purr, come forth.

Suddenly Captain Polly’s voice becomes deep, and it’s as if she’s talking for me as Cyrano de Bergerac talked for the stupefied Christian to Roxanne.  “Mi Lady, your card.”

I remove it from my shirt.  With jittery fingers, I take it from the envelope and give it to her.

“Take my hand.  Come sailing with me,” Polly-Cyrano requests.

We walk to the river and board Turt’s carriage of a shell.  We sit close to one another and hold hands tight.  As an excuse, we say, “So neither of us might topple into the water.”

Turt sets sail, always looking straight ahead to allow us to be alone.  Neither of us talks as we drift; free of all school and playground worries.  Our winged Cyrano keeps her big beak out of our privacy by flying parallel to us, an unseen chaperone hidden in the woodland.

The warm breeze pushes through the round curls of Reena’s hair.  I feel I’m drowning deliciously in the jasmine perfume of her shampoo.  I put my head to hers.

She doesn’t pull away.

I know we both are feeling the pulse of each other’s temples beating as one.  Even when a curious alligator swims up to investigate the goings-on on his or her river, and Turt opens his razor-sharp beak-snout to ‘HISS’ him or her away, we do not separate.

Are we oblivious, or are we blissfully in lo…No, I’m sure I’m too young for that.

After 20 minutes, Turt ports riverside.  Gently I hold Reena’s hand and we disembark.

Turt motions with his beak-snout the path we should take.  Slowly he trails us.

I’m dying to speak for myself.  Just when I start to, Captain Polly shows herself and squawks,

When danger arises, Turt can step sideways on his fin-claws fast as a spinning top.  The entirety of his sharp-edged shell frame becomes a deadly cudgel if need be.  As Reena and I turn, Turt is already facing a 600-pound tiger that has leaped from the underbrush, and is within one bound of us.

The beast’s scream-roar vibrates the trees in the Lindian Woods. Small creatures shriek and scatter.

The Lindian River and those of fin within it tremble.

“Aark!  Stay where you are,” squawks Captain Polly.  “He’s jealous, Reena, Raji.  Braak! You make prettier tigers than he will ever be.  Turt and I will cure him of his rage.”

Captain Polly flies, talons bared toward the top of the tiger’s head.  She gouges, again, again, grounding him, mid-pounce, as he leaps toward us.

That’s when Turt rams the tiger’s stomach with his shell.  His automobile-equal weight winds the beast, and he flops lamely to the twiggy floor. Turt’s been traversing the Lindian Woods for well over a hundred years. He’s an old pro at handling its tigers. He clamps his fin-claw atop the breathless tiger to imprison him.

Turt winks and motions with his beak-snout proudly raised high, as if to say,

‘You three proceed.  I’ll have no trouble making sure this one doesn’t follow.  If he even tries anything, well, I pity him. I loyally await your return.’

Reena and I hold hands, tightly.

In a few minutes, we arrive at something so majestic, so overpowering, so like I’ve never before seen, that my eyes water.  A lump forms in my throat and I am speechless.  Towering above us is two Lindian Fan Trees.  By their height, and the sturdiness of their entwined roots that grow together as bastion legs just above the ground, I know they’re well over 100 years old.  Their lean trunks grow at a slight angle upward, and then veer inward 15 feet in the air, merge, as two mouths meeting, before continuing their separate paths skyward.

“The…the…”  Reena can hardly speak either.  “I’ve heard stories of it.    But I never really thought it existed.  It is so grand.”

I take Reena in my arms and our mouths meet.

Walk With Me to the Kissing Tree
(Image ©2014 Raji Singh)

(Join me every Sunday night at the Fiction House, your place for short story, lark, whimsy, and merriment.  Meet the many residents as I archive their lives and centuries of adventures.  You can read of their origins in my novel TALES OF THE FICTION HOUSE.  They are completely different stories. My novel is available at Amazon, (Kindle and Trade Paperback) and Barnes and Noble.)

I am a writer, a foundling anchored by tale-telling and imagination. Read my history in Tales of the Fiction House, available at Amazon.com and Barnes & Noble (This is a portrait of my great-great grandfather. He's a handsome devil and I am his spitting image.)
View all posts by Raji Singh →
This entry was posted in archeo-apologist, Children, Fiction House Publishing, humor, Short stories, whimsy, writing and tagged a boy's first kiss, alternate history, Calico, Captain Polly, culture, fiction, Fiction House Publishing, first kiss, folk cures, Foundlings, humor, imagination, James Thaddeus 'Blackjack' Fiction, Lindian Woods, Luny Mum, Mark Rogers, Raji Singh, short stories, summer love, Tales of the Fiction House, The Seasons of My Giving Back, Turt, whimsy. Bookmark the permalink.