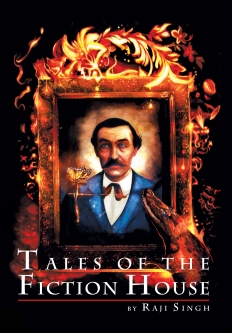 As the summer wanes, why should our imagination?  Join us at the Fiction House for a favorite fable, Lore of the Lindian Woods as observed by aerialist and oral storyteller Captain Polly.

As squawked to Raji Singh

When last we saw the Frog Brothers atop the tattooed rock…

They were leaping from the clutches of the half-gator/half-human monster tattoo image called Laza Bones. The sunlight had brought the drawing to life. But, quite sadly, the Frogs jumped right toward the wide-open beak-snout, sharp as a razor; of a shelled creature.  They’d never seen the likes of him.  Ever.

The beak-snout closes and holds them tight.  The Brothers feel squished. They peek out.  They see a large fin-claw belonging to the creature. It reaches up and slaps Laza Bones flat as a monstrous lily pad.

The pancaked, ‘grrring’ monster squirms, trying to re-inflate himself. The creature spits out Brer and Frer, right atop that mad pad. They edge quickly away from it. Before they can hop to safety, the fin-claw moves. It hovers over them. They cannot move.

Frer realizes. ‘We’re not on a rock at all.’ He whispers to Brer. “We’re on the creature’s shell, Brother.”

The creature rises up and now three more fin-claws show. Its strange beak-snout moves, until its sleepy blue eyes are inches from the Frog Brothers.

“Don’t leap away, Fellows. I’m Frog friendly.” He removes his fin-claw from above them.

Brer and Frer stand up – half scared-half intrigued. Brer is brave, or tries to appear so. His glare meets the creature’s stare. “Aren’t you afraid that we greenies may eat you?”

Laughter blares from the beak-snout. The trumpeting sound is sweet, but the breath smells sour.

“Ooh,” Brer whispers to Frer. The Brothers try not to flinch. “He eats raw fish.”

“My name’s Turt,” says the creature as he starts to mosey toward the Lindian Woods. 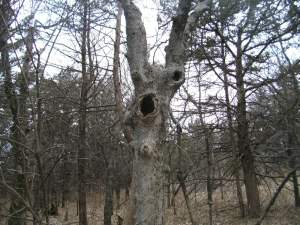 “The pond is lovely there, so I hear. I’ll just bet that’s where you were heading.” All the while Turt is telling Brer and Frer this, his beak-snout remains frightfully near them. The Brothers have no thoughts about trying to hop away – this shellster is too quick. “What are your names, Friends?” Turt asks.

“We’re the Frog Brothers. He is Brer. I am Frer.” The Brothers lose some of their fear. Still they feel leery about the monster carved into Turt’s shell.

Turt senses the wise caution. He informs them. “That’s Laza Bones. He’s one of the meanest creatures to walk the earth and swim the seas. I must flatten him now and then to keep him from doing his mischiefin’.”

“Where did all the pictures on your shell come from?” Frer casually asks. He wants to remain on Turt’s good side, his friendly side.

“I travel the world. Many two-legs, and many creatures also, they like to leave their mark on me. If I like them, I let them. If I don’t, I let them know. I’ll show you how.” He trumpets a vicious growl, but considerately aims it over the Brothers’ heads.

Turt feels bad for scaring them and for his saliva that rains down on them. They aren’t about to risk any quick movements to wipe the sliminess away. To try to let them know he is really, truly friendly he says, “If you want, I’ll let you draw on me.”

“I’m like a turtle, but I’m called a Trumpeter.” Turt notices that the Frogs keep staring over toward Laza Bones. Their expression of anger, almost hate of the he/it is the same as was Turt’s, when he first noticed the he/it scarring his shell when he craned his neck and saw the he/its tattoo for the first time. Turt is sure, that like so many animals, Frer and Brer too must have had bad experiences with Laza Bones. “The he/it is no friend of mine, Dear Brothers. He carved his picture into me while I slept. The reason I don’t scratch it out: So others will see and realize that such evils crawl and slither the earth. Beware!”

Calico…We’d much rather see her than Laza Bones! (©2013 Image by Joseph Rintoul)

Laza Bones groans, and Frer and Brer hear his muffled threat, “I’ll get you Turt.  Just you wait.”

Turt looks away from the Frogs – to give them a chance to hop away if they wish. He says to himself. “I hope they won’t. I like the little guys with their bold curiosity.” Turt sniffs the air, smelling the sweet fruit of the Forest they are coming to. He smiles: Because Frer and Brer don’t hop away.

They’ve become too anxious to introduce Turt to all their friends in the Lindian Woods. And so they too may see close up the dangers of the Laza Bones’ of the world.

Turt’s smile crescents even more. Two new friends has he made today. Maybe soon a whole lot more at the Woods and in the pond. “At least the Laza Bones of the world won’t bother anyone in the Lindian Woods, Brer and Frer,” Turt says. “Not while I am around.”

Turt reaches into a pocket of his shell for pencils he always carries.  He gives them to new friends so they could leave their mark on him.

(Join me at the Fiction House, your place for short story, lark, whimsy, and merriment.  Meet the many residents as I archive their lives and centuries of adventures.  You can read of their origins in my novel TALES OF THE FICTION HOUSE.  They are completely different stories.  My novel is available at Amazon, and Barnes and Noble.)